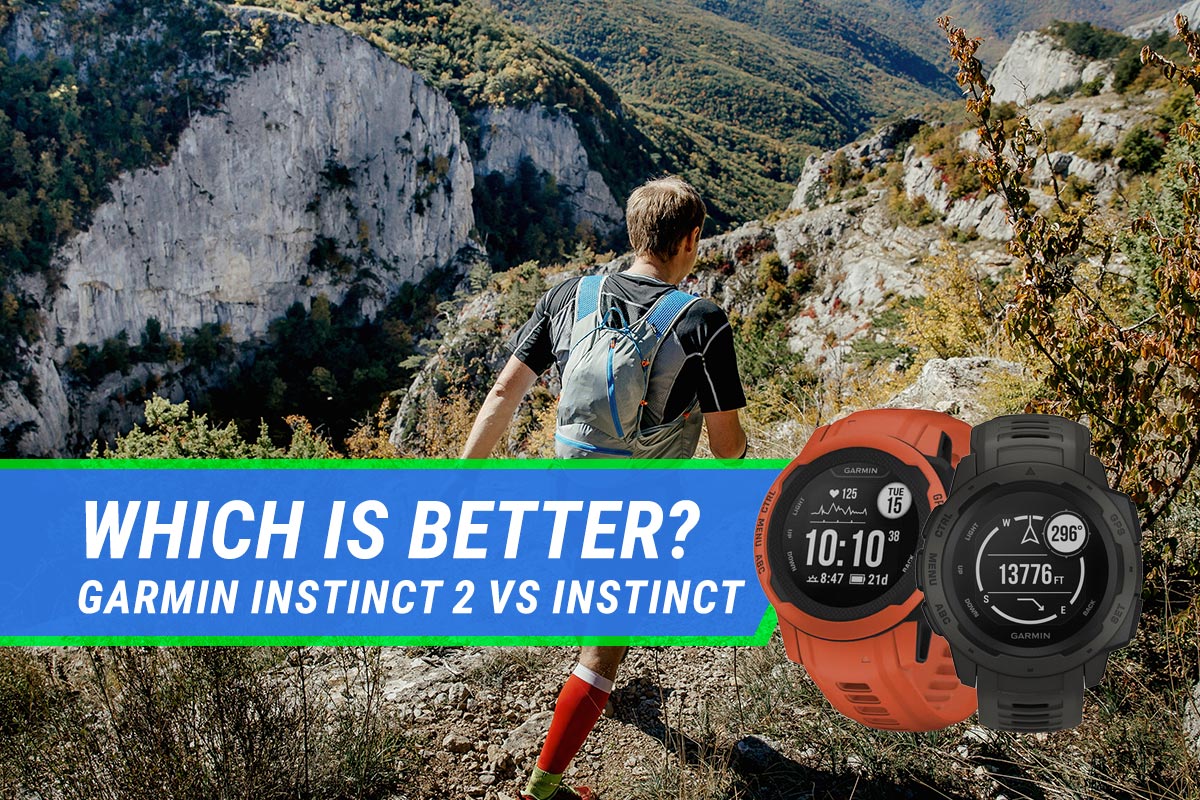 So far in 2022, Garmin has been quite busy in terms of production and promoting a wide array of new devices, including the Instinct 2. But in a side-by-side comparison, how does the Garmin Instinct 2 compare to the Instinct?

The original Garmin Instinct was a well-received watch due to its price and features for hikers and outdoor enthusiasts. But, the Instinct 2 has raised the bar by increasing the screen resolution and design quality of the original and adding many advanced training tools not seen on the Instinct.

Are you still trying to decide if the Garmin Instinct is right for you? This can be all the more confusing now with the introduction of the second generation model in the line. But this guide will break down all the key differences and similarities between these two models.

We will also do a side-by-side comparison to allow you to conveniently select the model that best serves your needs.

Read on to find out more.

Here is a brief comparison between the features of each model.

The Garmin Instinct series are a range of Garmin watches that feature longer battery life in addition to a streamlined interface for easy adaptability to a wide range of different performance features.

The Garmin Instinct line is known for its comfort on the wrist as well as its variety in terms of different models that feature battery life needs beyond everyday charging – or even every week charging.

Garmin Instinct watches are on the more affordable end of the Garmin price range, and despite not having a sleek and fashionably-tech design scheme, this line is straight-to-the point and power efficient.

Garmin Instinct 2s solar tactical edition stands out in terms of its similarity to the Fenix 6 and Fenix 7 Garmin watches, but for a fraction of the cost than those innovative models.

Expedition GPS activity is also something that you can find in the Garmin Instinct series, in addition to some of the more advanced health monitoring features of other leading digital publisher brands.

Although there can be some initial confusion with the Instinct series due to the onslaught of varieties for each of the two main models, the Garmin Instinct line is certainly a must for those who enjoy outdoor sports.

These two models only truly differ from the other models in terms of the battery life capabilities. These 2 models have a very long battery life, but you will find that the Instinct Solar models are much better in this area.

The Garmin Instinct can refer to either the first generation instinct watch or the more popular Instinct Solar variation.

One of the most noticeable features of the Garmin Instinct is the inclusion of widgets. No matter how you may feel about widgets, the Garmin Instinct does a great job of keeping the widget to the right of the main display screen, and this widget can be customized to include important alerts, notifications, and even GPS data.

There is also a convenient music widget that allows you to see what music is currently being played or what the last track played was.

The navigation and area calculation features and activities are also what makes this watch stand out. Previously, such rough terrain features were only seen on some of the more higher end brands such as the Fenix line and the Tactical Delta Solar edition.

There are also a wide variety of alarms and alerts on the Garmin Instinct Solar model. The set time for GPS is perhaps the most convenient, since this allows you to coordinate your activity based on the specific time you set for GPS syncing.

Since the Garmin Instinct 2 is the newest model, let’s take an in-depth look at this watch.

First things first, there are over 19 different versions of the Instinct 2 to choose from. But before you get too confused, many of these different models are merely color, such as the popular neo tropic, and size variations tailored to meet different needs and aesthetics.

Each of these watches are also available in solar GPS versions, and the price point for any of the watches you choose ranges from $300 up to $500, which is not too bad considering some of the other higher end Garmin devices released so far this year.

As if you may not be confused enough, there are also surf tactical versions of either of the Instinct 2 models to choose from as well, which all fall within the above-quoted price points.

The basics to take away from these many different versions is that the Garmin Instinct 2 has a longer battery life, especially a solar GPS model, as well as V02 Max, thermometer optical heart rate blood oxygen saturation reading, sleep score measurements, a transflective memory in pixel dimensions on the Instinct solar versions, and much more.

In terms of price, you will find that the watches vary from as low as $200 (original Garmin Instinct) up to $500 (Garmin Instinct 2 Solar editions).

But that isn’t bad since each of these watches are also available in Solar GPS versions, and the price point for any of the watches you choose in terms of Solar ranges from $300 up to $500. This is competitive considering some of the other higher end Garmin devices released so far this year.

In terms of overall design between the two watches, both watches look practically the same from far away. But up close you will notice that the bezel of the Instinct 2 is a bit more contoured and the screen resolution is brighter.

I would however say that the Instinct 2 looks a bit more modern when compared to the rather utilitarian look of the original and the Solar Garmin Instinct.

Both watches have a very tactical and rugged appearance, and neither (with the exception of some of the colors available with the Instinct 2) are likely to appeal to buyers who want to have a beautiful looking watch on their hands.

This is because both Instinct’s are meant to reflect rugged outdoor terrain activities, which can account for the rather dull design.

But dull does not mean bad, and neither of these two watches are ineffective or not worth worth the price tag.

The screen of either model and its variations is smaller compared to some other high end Garmin watches. The reason for this is the inclusion of many solar panels underneath the watch face, which makes for a much more efficient solar charging ability for the watches.

The screen on either model is not necessarily bright, but it is clear and easily readable, especially on the various solar editions of each. The Garmin Instinct 2 display is a bit brighter when compared to the Garmin Instinct models.

Each model and its variations have a wide array of performance features in addition to GPS dynamics that also come with specialized alerts and notifications.

The GPS accuracy on any of these devices is superb, and the most advanced and accurate can be found on the Instinct 2.

All models feature unlimited battery longevity, but you will notice that this is only really true on the various Solar models of each entry in the series.

The Garmin Instinct 2 in its Solar editions and the Solar Tactical edition is seemingly endless in terms of battery longevity.

Which watch is better?

By giving the Garmin Instinct 2 so many different advanced training tools, an updated sleep tracker, Garmin Connect IQ access, and little tweaks like widget glances help to make it feel more modern even though the original Instinct and Garmin Instinct Solar is not that old.

I also think the Garmin Instinct 2 now becomes a really solid option for people who are in the market for something like a Garmin Fenix 7, but didn’t want to shell out the better part of a thousand dollars.

You get most of those features in a rugged watch now on the Instinct 2 for less than half the price of many newer models, and not too far from the price of the original Instinct and the Garmin Instinct Solar.

This is perfect when using solar expedition GPS activity, and the GPS battery life is nearly 30 hours assuming all day wear is expected.

Options like training load focus and other training features are superb with GPS accuracy that is pinpoint perfect. The design and fiber reinforced polymer case in the regular or Solar edition models is also very nice.

Go for the Garmin Instinct 2 or many of its Solar variants.

Can you use Garmin Instinct without a phone?

Is Garmin Instinct 2 good for military?

The Garmin Instinct 2 Solar Tactical edition is certainly a perfect model for military service members. This is due to the prioritization of rugged outdoor terrain that is customized across a wide range of activity profiles such as hiking and even mountain biking.

If you want solar charging, and certainly if you want a tactical watch, the Garmin Instinct 2 is an affordable watch that certainly stands out for that reason amongst Garmin’s more expensive 2022 releases so far.

Found this comparison useful? Why not have check out of these Garmin products: