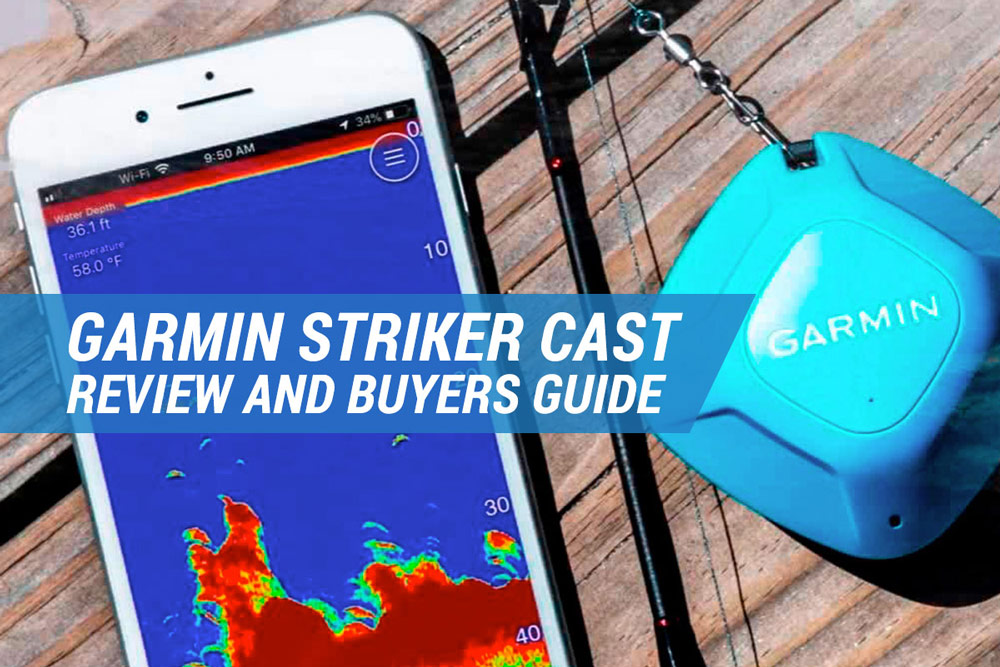 When it comes to the wide range of fish finder devices on the market, everything from transducers to simple castable sonar screen devices is available. But sometimes, simplicity is the best remedy when all you want to do is fish without all the tech wizardry and advanced setup that come with advanced transducers.

In this review, we are going to take a look at the best fish finder that fits this model but still maintains a consistent level of Garmin quality, the Garmin Striker Cast GPS Castable.

Read on to find out everything there is to know about this simple product, and how it can help you catch more fish for a more modest GPS tech price.

Many anglers are always looking for a new secret weapon to find fish, and it’s the GPS-enabled Striker Cast casting sonar or other similar simple units that sometimes make the most sense.

Making waves, metaphorically, this fish finder allows you to cast your fishing rod from shore, dock, or watercraft, and reel back in to locate fish and display them on your smartphone or tablet.

The sonar streams wirelessly from up to 200-feet away, working in freshwater or saltwater (and even below the ice), to show you fish and structure in crisp detail.

You can select from easy-to-understand traditional 2-D sonar and ice fisher flasher modes, with setting adjustments for gain, range, and more. The built-in GPS provides the ability to create your own maps with 1-inch contours by using the included Quickdraw Contours software.

This useful addition allows you to easily download new maps, or share yours with the Quickdraw Community.

The device streams and displays sonar on a simple phone app interface, where setup is a virtual snap thanks to the simple design of the device. Scans of fish and structure locations with the Striker Cast GPS Castable Sonar are easy to interpret thanks to the easy-to-read fish symbols.

Once cast, all you have to do is download the free Striker app for your compatible smart devices, and pair it with the Striker Cast sonar unit, before sitting back to enjoy your fishing experience.

Details to Keep in Mind:

The Striker Cast GPS sonar works in freshwater or saltwater (and even for ice fishing) to show you fish symbol patterns and structure in crisp detail.

The built-in GPS provides the ability to create custom Quickdraw maps with 1-inch contours, so you can remember (and maybe share) where you found that great fishing spot with friends.

With this castable fish finder, you can select from easy-to-interpret traditional 2-D sonar and ice fishing flasher modes, with setting adjustments for gain, range, and more.

To make using this castable sonar device even simpler, turn on the fish icons selection to view graphic images of fish targets and their depth readings, so you’ll know exactly where to drop your line based on the circular depth scale.

This durable, lightweight sonar device is built to last and is easy to cast, using a 20-pound test weight or higher fishing line.

It’s also water-resistant to IPX6 and IPX7 standards. To conserve battery life, Striker Cast GPS automatically powers on when it’s floating in the water and turns off when it’s not.

Are you are wondering just how long can you fish for? The internal, USB-rechargeable battery lets you go for more than 10 hours between charges, but keep in mind that battery life may vary depending on usage.

When did the Garmin Striker Cast come out?

The Striker Cast GPS was released in the fall of 2020 as an easy-to-use sonar device and fishfinder geared towards fishermen who do not always choose to go out in boats.

How does the Striker Cast work?

All you need do is cast the device into water, and once the bottom of the device touches the surface, it will activate in your preferred fishing spots via a transducer beam that syncs to the app on your cell phone.

Once connected to the Striker app, the sonar features show typical depth range by shading contours in 2D – just as you could expect to find on a boat fishing finder.

How do you cast on Garmin Striker?

Garmin are renowned for their attention to detail and quality of their products and the Garmin Striker lives up to expectations. Just cast it out, and reel it back in to view sonar with a 60 metre castable range via an app display on your smartphone or tablet. The cast app displays superb and easy-to-read statistics regarding depth and fishing visuals.

This is thanks to the Quickdraw contours that allow you to spot fish and easily cast to your phone without the need for a USB cable.

The battery on this device is decent thanks to the incredible syncing with WiFi. Reading custom maps or your own quickdraw maps is quite power savvy, since all of these features are separate from the device itself and are used via the app.

How do you read Fish Finders?

Reading the sonar return or quickdraw contours is as easy as deciphering fishes from structures and the ground. Water depths are displayed on the side, and you can always consult with the quickdraw contours community if you need help with certain maps.

Which Garmin Striker has WIFI?

The Striker has WiFi connectivity up to 200-feet, which comes in handy when you are out fishing offshore and want the convenience of using a lightweight and easy-to-haul fishing finder.

In the past, I have had other fishing finders and brands that I have used, and I bought this caster mainly for shore fishing and sometimes even for kayak fishing.

I also gave it a try because it is Garmin, and the quality with Garmin transducers and fish finders is always top-notch.

The device works as well as I expected, and it feels like other Garmin units of similar fashion. The Garmin Cast app is easy to use, intuitive, and setting it up is straightforward and easily synced.

If you want a simple fishing finder that will get the job done without all the programming (and expensive price tag), the Garmin Striker Cast is well worth a purchase.

If you need something more complex and that reads structures, depth, and patterns with much more accuracy and technological acumen, consider trying the Garmin Livescope.

link to Garmin Quatix 7 Review | The best watch for boaters?

When we think of Garmin, we typically do not think of the brand as an innovative marine electronics manufacturer. But the Garmin Quatix series, headlined by the new Garmin Quatix 7, has enough...

Boat transducers are incredible marine electronic systems and make going out to fish an easier and more fun sport depending on which fishing structure you prefer. Of all the companies that make boat...