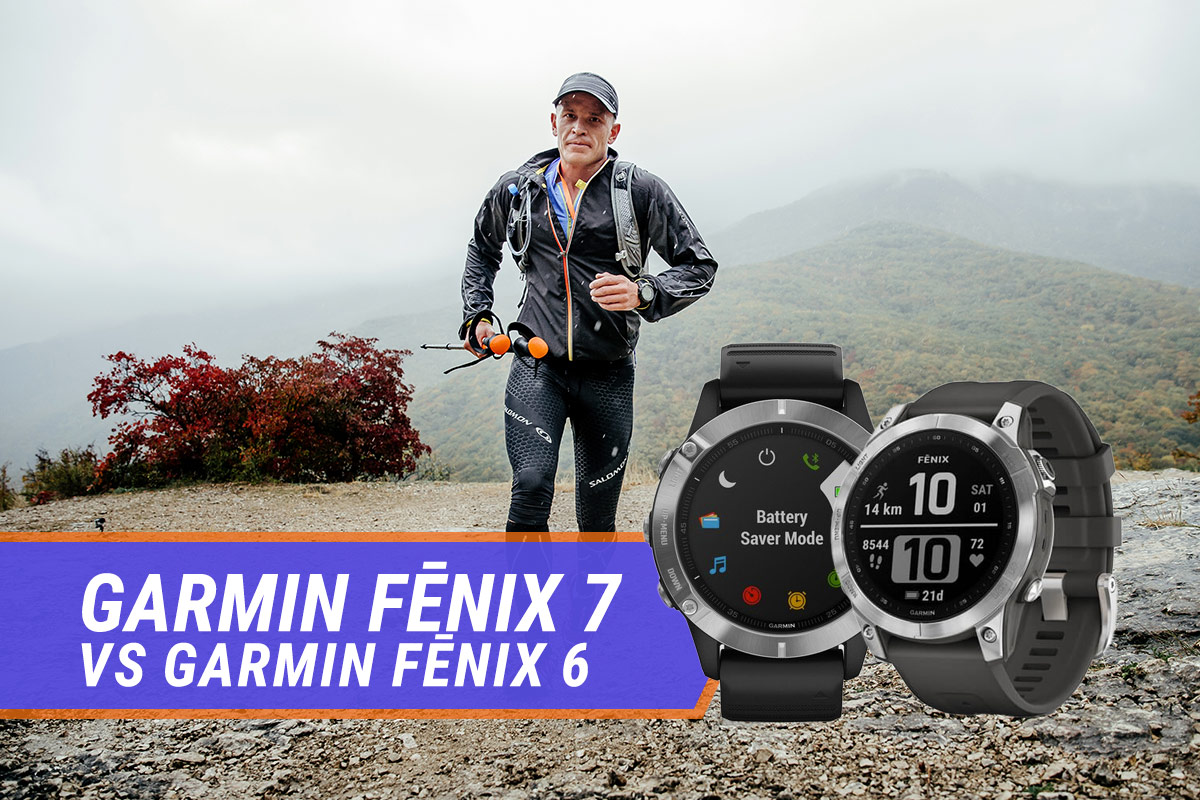 When comparing Garmin Fenix 7 vs. Fenix 6, it becomes clear that there are some major similarities between these two models. The Garmin Fenix 7 is new and the Fenix 6 is older, but the differences between the two watches are still important based on what your particular needs are.

Both the Garmin Fenix 7 and the Fenix 6 have real time stamina tracking and solar models are available. Although both have great battery life, the Fenix 7 does include some features that you will not find on the Fenix 6.

In this guide, we are going to take an in-depth look at both watches to form a side-by-side comparison to better help you determine which suits your needs best.

I have long advocated for the stellar quality of the Garmin Fenix 6 Pro Solar, but with the similarity found in the Fenix 7 in addition to new features, I may have to start pushing for this newer model.

Regardless of personal preference, this guide is going to tell you everything you need to know to differentiate the watches.

At a Glance: Garmin Fenix 7

There is the standard Fenix 7, the 7X, and a wide range of sapphire solar models that compose the Garmin Fenix 7 line as a whole.

Features such as topoactive maps, white light, ahead feature details such as real time stamina, and the smaller size, more powerful power glass, and the 4.0 pulse ox are by far the biggest standouts of the new Garmin Fenix 7 line.

As a leading digital publisher of innovative activity tracking smart features, Garmin consistently ups itself each time a new watch is released, and the Fenix 7 line may be the best yet.

The 7 line also features a tactile screen design scheme that allows you to configure the settings seamlessly into various sports activities and other features right on the bezel display.

You can now scroll through features easily and not have to bother with multiple button pushing or changing screens constantly to see all the features and stats that you need to see.

At a Glance: Garmin Fenix 6

The Garmin Fenix 6 is a few years old now but is still one of the standout lines not only within the Fenix series but also Garmin watches in general.

The Fenix 6 line revolutionized mapping features within its watch line in technology not previously seen so well since the original GPS devices Garmin first made a name for itself with.

The Fenix 6 Pro Solar, in particular, is perhaps the best model in the Fenix 6 line, and this is largely because of its innovative and powerful battery that extends battery life to a staggering degree.

The lens is solar charge compatible and none of these innovative technologies drags down the effectiveness of the other features that are packed into this model in particular.

Any Fenix 6 model comes with gorilla glass and is waterproof up to a very comprehensive 100 or so meters of depth.

In fact, many of the same features that are carried over the new 7 line can still be found on the Fenix 6, and the exact details of differences between the two lines can be found mostly within the design differences and the new design innovations that are part of the new Fenix 7 line.

In this section, we are going to break down both watches to extract the noticeable differences between the two. Each category is broken down covering the main features of each.

The Fenix 7 certainly looks bigger and bolder when you place both watches side-by-side. There are bigger edges on the arm bars because the screws are built into the arms unlike what is seen with the Fenix 6.

There is also a smoother face with the Garmin Fenix 7 compared to the Fenix 6 which appears more bolted.

There is also a great deal more writing and design patterns on the Fenix 7 which allows you to know exactly what the readings on the watch are displaying.

There are also more overall differences that immediately catch the eye when looking at the bezel of the Fenix 7, which is even more noticeable when you set the screen quality to full brightness, which manages to shine brighter than the full brightness mode on the Fenix 6.

This can certainly help when you are outdoors during times of diminished natural light.

But in terms of overall size differences, the two watches only come down to a few millimeters in difference with the Fenix 7 being slightly bigger.

The Fenix 7 has a power glass lens, which can protect all the features a lot better than the plastic covering seen on the Fenix 6.

The Fenix 7 also has a flatter back when compared to the more obtuse back design found on the Fenix 6, which makes for a more comfortable wear. There is also a guard around the start/stop feature on the Fenix 7 so that you don’t accidentally press start or stop on your activity which can mess up your performance metrics.

In terms of the bands, the Fenix 6 has ridges along the band whereas the Fenix 7 has smoother ridges and a more rubber texture overall to the band. The Fenix 7 also has a new touchscreen interface which is a major difference when compared to the Fenix 6.

The Fenix 6 was always well known for its brightness and actually comes out to between 70-75 lumens depending on the settings. But the Fenix 7 expands upon this a great deal and comes in with a brightness of between 80-85 lumens and you can certainly tell by looking at the watch when it is in full brightness.

Even though both watches are around the same size, the ultra-brightness of the Fenix 7 makes it appear much bigger than the Fenix 6, and this is welcome news if you enjoy brightness and full luminosity on your fitness watch.

Garmin’s power manager feature is present in the Fenix 7 just as it was in the Fenix 6 to allow you to pay closer attention to the features hogging the battery and running down the efficiency of the watch.

One of the main differences when it comes to the optical heart rate sensor in both is that the Fenix 7 comes in at 4.0 pulse ox whereas the older Fenix 6 is 3.0 in the standard versions.

The wellness monitoring features and the sensors on the Fenix 7 are not a whole lot of different from the same features found on the Garmin Fenix 6.

One key difference is that the Fenix 7 also adds multi band GPS support to improve outdoor tracking and your overall training load.

But the watches are similar overall in terms of performance metrics such as V02 max, training insights, and visual race predictor.

Additionally, pace pro, Garmin coach, Climb pro, and daily suggested workouts with a recovery advisor are featured on both models. Sleep tracking features are also fairly similar with little to no differences of note.

The 7 model features a new real time stamina feature which is similar to what is found on an Apple Watch and somewhat similar to many of the performance real time features found on the Garmin Epix watch when in smartwatch mode.

Which Should I Buy?

To better help you decide which model to purchase, the various pros and cons of both watches combined are presented below. You will easily be able to see which model offers the best features for you according to your preferences.

So which is better to buy, only you can truly answer this question!

But if you do want a push towards a selection, the Fenix 7 is quite simply an amazing watch, and it is totally worth the price based on the wide variety of new features and the superb detail that has gone into the overall design of the watch and its higher-end editions.

Is there a new Garmin Fenix coming out?

Both the Garmin Fenix 7 and the Garmin Epix are the new Garmin watches released in January 2022.

Many in depth reviews are still trying to make a fully-formed decision about both watches, but after much use across a wide variety of activities, I can say that both models are certainly worth the investment.

Can you answer calls on Garmin Fenix 6?

The Fenix 6 line does display the name and phone number of a caller as long as you have your compatible smartphone connected. You can also talk to the caller through your smartphone or you can decline the call right through your watch.

What are the sapphire solar models?

The sapphire solar models of the Fenix 7 are quite widespread and a bit confusing at first glance. All are power glass and feature solar expedition GPS, but the sapphire models all share the ability to protect the bezel to a wider extent than what is seen on the standard Fenix 7 model.

In closing, the Fenix 7 is a great watch and certainly one of the most talked about of the first quarter of 2022. It does have a great deal in common with the Fenix 6 line, but the features of the 7 line, including a wide range of design differences, is hard to resist, and truly worth the investment.

If you are intrigued by these Garmin watches, check out these model reviews: