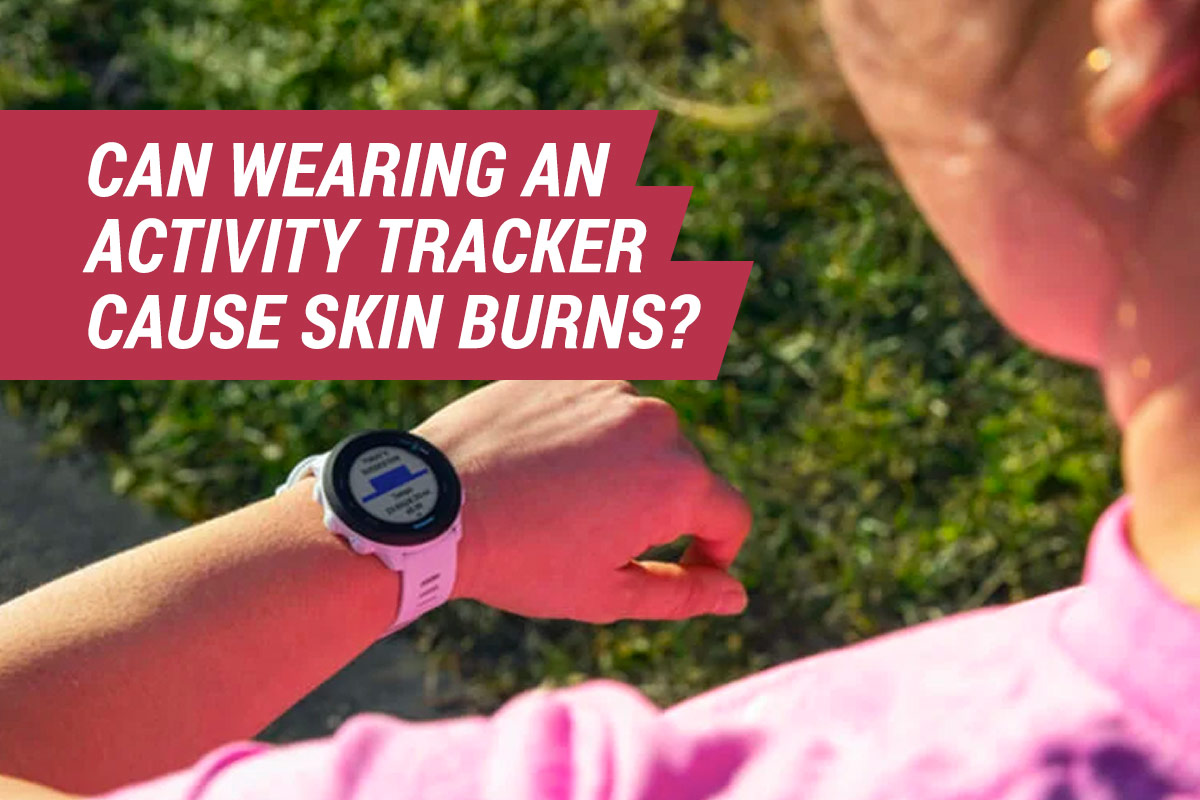 Contents show
1 Can Fitbit Cause Burns?
2 Why Is My Fitbit Burning Me?
3 Can Garmin Activity Tracker Cause Burns?
4 FAQs
4.1 Can a Fitbit battery burn your skin?
4.2 Why does Fitbit cause skin irritation?
5 Summary

With any electronic device, health and safety are two priorities that frequently undergo extensive internal and external testing, but there are always circumstances that can go awry. Activity trackers and smartwatches are designed to be worn on the wrist, and since these devices are battery-powered and naturally heat up due to internal components, bodily harm is not outside the realm of possibility.

With this in mind, can wearing a Fitbit or Garmin activity tracker cause skin burns?

Most cases of skin irritation related to Fitbit or Garmin activity trackers are caused by a dermatologic condition known as contact dermatitis that results from foreign objects pressing against the skin for prolonged periods of time. The battery of an activity tracker can cause burns if the battery begins to overheat.

Can Fitbit Cause Burns?

In 2019, there was a report that surfaced from a man claiming that he woke during the middle of the night to the intense burning and tingling pain in his wrist. He claimed that his Fitbit activity tracker was burning his skin, which was confirmed by emergency medical technicians early that morning. The user was dealing with third-degree burns and a possible skin graft to correct the damage caused by the activity tracker.

This is obviously alarming and unfortunate, yet there are risks that can come with batteries in smart devices like the Fitbit activity tracker. Not only do activity trackers emit radiation that can be harmful to your health over the long term, but there are also some potentially dangerous consequences that can result from an activity tracker’s battery malfunctioning.

Both Fitbit and Garmin activity trackers emit Bluetooth radiation, which is a product of low-frequency EMF radiation. But this is not what can cause burns in an activity tracker, burns are caused by the overheating of the active battery that is being used to power the tracker’s smart features.

Since the above-mentioned report occurred during a user’s sleep, many people are wondering is it safe to sleep with a Fitbit? This is entirely dependant on the quality of the battery at which you are maintaining for your Fitbit device. An overstressed and long-running battery at peak speed and nonstop can cause malfunctions in the internal components of the battery that power the smart features.

Furthermore, most Fitbit and even some Garmin activity trackers are made with nickel, which can cause extreme skin irritation and even burns with constant wear on the wrist. When you combine nickel irritation on the skin with radiation from the device, this could potentially lead to burns on the wrist.

Why Is My Fitbit Burning Me?

A Fitbit radiation burn seems far-fetched, but it is entirely possible. It is also important to understand that there can be variations in the term ‘burning’ when in fact, Fitbit tingling or irritation to the skin on the wrist could be the actual problem. The nickel that forms a large portion of the chemical makeup of the design of the device has been known to cause rashes and blisters which some users can mistake as burns.

But if your Fitbit is burning your arm, like what was reported by the man in the referenced article, this is likely due to a faulty battery or the collision of nickel and radiation that is actively burning into the skin.

Can Garmin Activity Tracker Cause Burns?

Garmin has also run into problems in the past with some of its watches and fitness trackers causing skin irritation and even minor burns. I will say that Garmin has taken proactive steps to address some of the problems that can cause skin burns.

The introduction of the Garmin Vivosmart 4, with its nickel-free design and increased band comfort, is a great choice if you are concerned about possible burns and certainly if you suffer from a nickel allergy.

Can a Fitbit battery burn your skin?

Batteries in smart devices have the capacity to overheat at an exponential rate when compared to batteries in non-smart devices. An activity tracker is responsible for sensing and recording complex amounts of data and reporting the data across other channels via Bluetooth. Batteries are tasked with providing power, and like all electronic devices, a battery is only as powerful if it can sit on equal standing with the power of the device.

If a battery is left on too long or isn’t charged properly and allowed to rest, the battery can easily overheat and lead to potential burns on the skin around the wrist. Also, the battery can cause the skin to burn even during normal activities when wearing the activity tracker. This is the same type of situation that would occur if you place your hand on the hood of a car after a long drive through the city.

Power and velocity emit heat, and this is the main purpose of a battery to provide the life of the device it is tasked with powering. A way to prevent possible battery burn with a Fitbit device is to leave the device turned off when you are not actively using it. Also, be sure to keep the battery fully charged as much as possible.

Why does Fitbit cause skin irritation?

A Fitbit activity tracker causes skin irritation in a number of different ways. The most obvious way is simply through the pressing of the device against the skin, which can also increase irritation due to sweat. Nickel reactions and battery burns are also possible when wearing an activity tracker.

In summary, yes, a Fitbit activity tracker and even some models of Garmin activity trackers can cause burns on the skin. Make sure you check to see if you have a nickel allergy before purchasing. Additionally, be sure to take care of your battery and give your device some downtime to prevent possible malfunctions of the battery as time goes on.

As long as you keep this in mind, activity trackers can be perfectly safe devices to use.

link to What to do when a Fitbit breaks

Continue Reading
link to How to choose the right fitness tracker

People across the globe are seeking efficient ways to improve their health. What worked for us before in nutrition, physical activity, and even doctor visits is giving way to exciting new trends and...