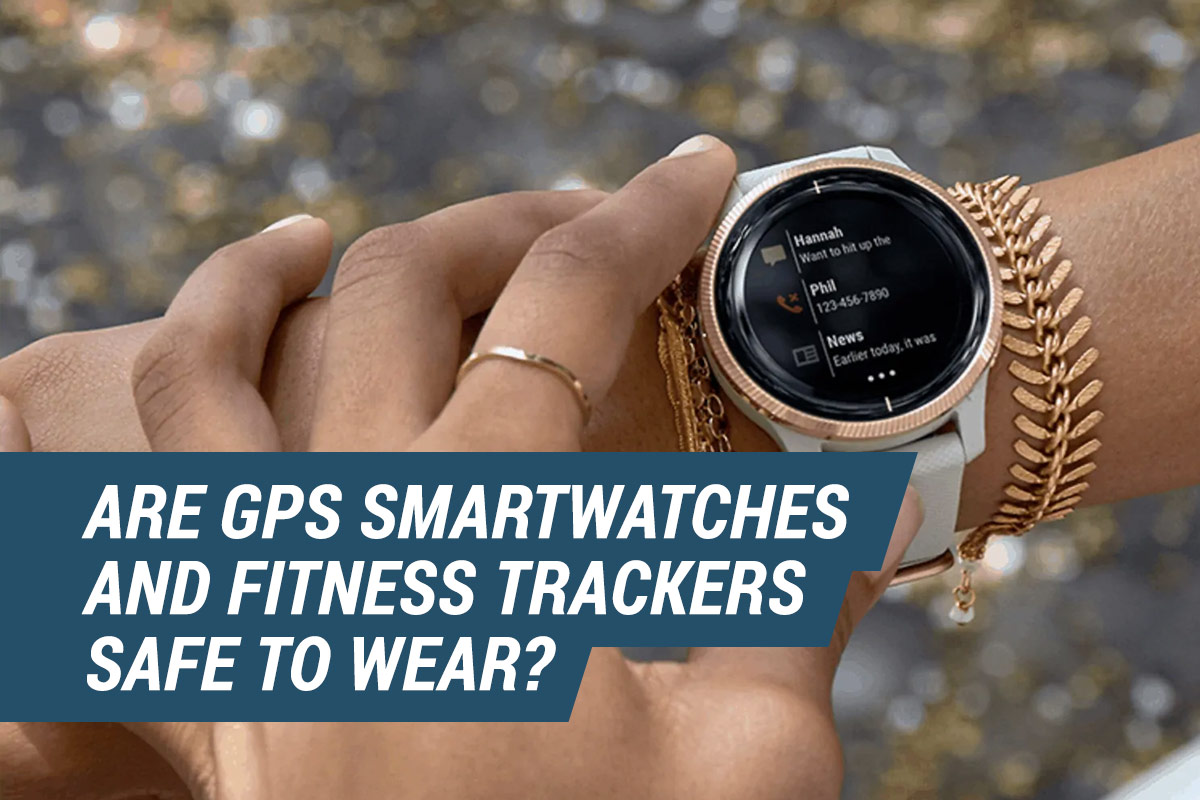 Contents show
1 Are Fitness Trackers Safe To Wear?
1.1 Garmin
1.2 Fitbit
1.3 Apple
2 Are There Any Side Effects on Your Health or Negative Effects From Wearing a Smartwatch?
3 Are These Devices Safe to Wear All the Time?
4 Does a Fitness Tracker Give Off Non-Ionizing Radiation?
5 FAQs
5.1 Can wearing a smartwatch cause cancer?
5.2 Do they cause wrist burn marks?
5.3 Is it safe to wear a smartwatch or fitness tracker while sleeping?
5.4 Are there any dangers from wearable technology in general?
6 Final Thoughts

GPS smartwatches and fitness trackers are safe to wear. There are instances of low emissions of EMF and RF radiation, but these levels are not enough to be concerned about regarding cancer or DNA mutations. Activity trackers can cause distractions, therefore, users should be responsible when wearing the devices.

Are you concerned about possible health problems from a fitness tracker? Do you wonder how long you can wear a fitness tracker to avoid health problems? If so, this is article will provide you with all the essential information you need regarding GPS smartwatch and fitness tracker safety. These devices are quite useful for maintaining a healthy lifestyle, but there are a few things to keep in mind. Read on to find out more about wearable device safety.

Are Fitness Trackers Safe To Wear?

Popular fitness trackers and GPS smartwatches, such as what is available from Garmin, Fitbit, and Apple, are safe to wear.

This can be a cause of concern for many users since all of these devices emit radiation, but it is important to know that there are different types of radiation and the energy levels are typically not enough to become possibly carcinogenic.

Outside of health concerns, you may also be curious about the safety of your private data and sensitive information such as your name, email address, and financial details stored in these devices, so this topic can be multi-faceted based on the amount of safety concerns there are.

Garmin manufactures both GPS smartwatches aimed at fitness, in addition to wearable fitness trackers and other similar devices.

Nearly all of Garmin’s devices emit radiation, however, the levels of radiation emitted are comparable to a cell phone, and are not a cause for concern granted you keep daily use of a Garmin device under the six-hour mark.

Obviously, Garmin devices are worn directly on the body, which means that both non-ionizing radiation and rf radiation will be exposed to a user’s skin.

Rf radiation, in particular, is a type of radiation that has been known to cause cancer in humans; however, it takes prolonged and excessive exposure at incredibly high frequencies to lead to this drastic diagnosis.

The same situation applies to cell phones, and in fact, a cell phone could be considered more of a concern since the frequencies are directly pressed against the brain.

High levels of these radiation types are directly correlated with Bluetooth and an app on cell phones, so if you do not have Bluetooth running all the time, this is not even a concern.

Overall, the radiation levels in a Garmin watch are so low, there is no reason for alarm when using a Garmin device. With this in mind, some older Garmin models have caused wrist or skin discomfort when worn continuously outdoors for long periods.

Additionally, Fitbit devices also carry much of the same energy characteristics as seen with Garmin. But again, these radiation levels are similar to what is seen with cell phones.

Fitbit fitness trackers produce a lot of EMF exposure, and this may lead to skin irritations for some people, but the EMG emit rate for Fitbit is safe with only moderate exposure each day.

All of the concerns and details mentioned with Garmin and Fitbit apply to Apple wearable trackers as well.

One point of interest with Apple is that watches and fitness tracker models are relatively new with the company, therefore, there is a lack of overall data concerning this brand’s safety.

But like any fitness tracker, the frequency program designed for wearables is low risk and could amount to no concern at all if moderation is practiced by the user.

Are There Any Side Effects on Your Health or Negative Effects From Wearing a Smartwatch?

In research conducted by the University of Utah in 2015 in conjunction with their cancer institute, it was found that fitness trackers are overall perfectly safe to wear.

Radioactive frequencies can lead to distress with internal organs but the amount of any given frequency depends on the overall exposure rate of the type of EMF radiation.

Like a phone, you need to give wearables a break from being attached to your body for hours and hours each day. This type of use can indeed be damaging to your health since the EMF levels with Bluetooth technology and WiFi could lead to health problems either immediately or years down the road.

Additionally, if using for sleep, some people may experience disruptions during a sleep cycle due to the frequencies emitting from the device.

Skin irritations and even burns are also possible with heavy and prolonged use each day.

Furthermore, using open WiFi networks and Bluetooth outdoors and in public spaces can also raise concerns with security breaches of the device. Not to mention distractions during driving or cycling.

Are These Devices Safe to Wear All the Time?

Fitness trackers should not be worn all the time, 24/7.

If you use the device all day and during your sleep, you may experience health concerns at some point in time; this doesn’t have to be immediate.

Some people may develop wrist pain or burns due to the radiation levels emitting from the device when they keep one on their wrist continuously. So be sure to keep device use to a minimum and only for fitness or sleep tracking use.

Does a Fitness Tracker Give Off Non-Ionizing Radiation?

Non-ionizing radiation with a fitness smartwatch or tracker is associated with Rf radioactivity, which is a form of radio wave.

This radio wave can be dangerous since it oscillates both electric and magnetic fields.

Limiting the usage of the device to only a few hours each day can keep you at low risk for dangerous exposure.

Can wearing a smartwatch cause cancer?

The radiation levels in smartwatches can be dangerous, but again, this is all related to how much exposure you take in from the watch.

The devices have not been around long enough to truly undertake research related to the possibility of cancer-causing exposure, but the fact does remain that the EMF emissions from a smartwatch are carcinogenic in large amounts and nearly endless amounts of exposure.

Do they cause wrist burn marks?

Yes, a smartwatch or tracker has been known to lead to wrist burn for users who wear the products continuously throughout the day and night.

One way to prevent this from occurring is to only wear the product when you are undertaking fitness activities that you wish to track. If the outside weather is hot and humid, you may also consider placing a piece of cloth underneath the watch or tracker to add a layer of protection to your skin.

Is it safe to wear a smartwatch or fitness tracker while sleeping?

Sleep is another popular use for fitness trackers as the wearables allow metrics related to heart rate and sleeping patterns.

It is perfectly okay to wear a smartwatch or tracker while you sleep, but you should try and limit the tracking you wish to do to only a few nights per week.

These products could also lead to disruptions in the sleeping cycle of many users due in large part to the energy levels emitting from the devices contrasting with the sleep cycle of your brain.

Are there any dangers from wearable technology in general?

The World Health Organization recommends a fitness tracker due to the overall health benefits that come from wearing the device during physical activity.

These products record many useful bits of information related to a person’s energy exertion, performance metrics during physical activity, as well as benefits related to how these metrics can help improve your health.

As mentioned above, there are dangers associated with these products, but it is important to understand two things:

The same radiation concerns can also be found with possible wrist burns from excessive usage. It is also important to only share information with apps that are stored or connected to the device that is protected by a strong password.

So, are fitness trackers safe to wear? The answer is yes. These devices are similar to cell phones in terms of radiation. You can reduce your exposure to EMF radiation by keeping usage to a minimum and only when you are undertaking physical activity.

Be sure to keep your smartwatch or fitness tracker password-protected, and never drive or cycle with the product if it causes distractions.

By day I am a freelance writer, whilst by night you’ll find me dabbling in lycra – for fitness purposes only. In the winter you will find me hibernating in my local gym, whilst during sunnier weather you might catch a glimpse of me stretching my legs as I run around the parks of New York.

Blood oxygen monitoring via a smartwatch offers a great way to monitor your respiratory health by observing your blood oxygen levels throughout the day. A blood oxygen sensor can adequately measure...

Thanks for visiting BestGPSTech.com. This website was born out of an idea, created to inform and educate other sport and fitness enthusiasts about the latest and best in GPS technology.